Finasteride is a medication that prevents the conversion of testosterone to its more active form, DHT (dihydrotestosterone) by inhibiting an enzyme called 5-alpha reductase type II in the scalp hair follicles. Lower levels of DHT in the scalp can slow down or prevent hair loss. However, because Finasteride does not completely block this conversion, it will not completely arrest hair loss.

Finasteride has been tested extensively all around the world by scientists and doctors in large clinical trials and was found to be very effective in treating male pattern baldness (androgenetic alopecia). At the end of 2 years after commencing Finasteride, it was found that 99% of men retained all the hair they had when they first started treatment, while those on placebo (sugar tablets) lost their hair with the balding process. Moreover, 48% of men who was on Finasteride actually had more hair at the end of the first year after commencing treatment. At the end of 2 years, 66% had more hair than when they first commenced treatment.

It is important to manage expectations with finasteride treatment as the main aim is to slow or stop the progression of hair loss rather than expecting hair regrowth. Any regrowth is considered a bonus. Some men actually experience some hair regrowth as early as 4 months after commencing treatment but it usually takes up to 2 years before any regrowth is noticed. Even so, only a third of men on Finasteride will actually grow enough hair for their family and friends to notice the difference. For men who start to go bald in their late teens and early twenties, Finasteride is a desirable treatment for many to delay the process as long as possible until their thirties or forties when they do not mind the prospect of becoming bald after establishing their careers and family lives.

Dutasteride is a drug recently prescribed for benign prostatic hyperplasia (BPH). Dutasteride is a dual 5-alpha-reductase inhibitor that is indicated for the treatment of symptomatic BPH in men with an enlarged prostate.

Dutasteride has also shown very positive effects as a hair loss treatment for sufferers of male pattern baldness. Dutasteride is a U.S.A. FDA-approved drug developed by GlaxoSmithKline under the brand name Avodart. For most men, Dutasteride increases the number of scalp hairs, helping to fill in thin or balding areas of the scalp. Men taking Avodart noted hair regrowth during the first 6 months of use.

As with all drugs, Dutasteride has possible side effects. Clinical studies showed that side effects were uncommon and did not affect most men. A small number of men had sexual side effects, occurring in less than 2% of men. These include decreased libido and a decrease in the amount of semen. These side effects went away in men who stopped taking Avodart. They also disappeared in most men who continued taking Dutasteride.

Dutasteride and Finasteride are both 5-alpha-reductase (5AR) inhibitors. Both treatments work by inhibiting 5AR, the enzyme responsible for converting testosterone to ihydrotestosterone (DHT). DHT is the primary androgen in the prostate. It is a primary factor in the development and progression of benign prostatic hyperplasia (BPH) and other prostate diseases and is also a major cause of hair loss.

A comparative phase II evaluation of Dutasteride and Finasteride in a double-blind placebo-controlled trial clearly demonstrates that serum dihydrotestosterone (DHT) suppression is significantly greater with dutasteride (0.5 mg daily) than with finasteride (5 mg daily). 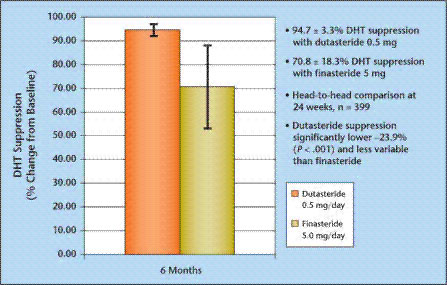 For unknown reasons, androgens cause scalp hairs to miniaturize (alopecia) and body hair to grow or enlarge (hirsutism). In the treatment of hair loss, spironolactone acts by blocking the effects of androgens (male hormones) on scalp hair follicles. At the same time, it can also reduce the amount of body hair that you have. Due to the feminisation effects of spironolactone, this drug is only used to treat female pattern hair loss and is not used in males.

Many women affected by FPHL experience an increase in hair shedding or a reduction in hair volume, or both. You may start to notice a reduction in hair shedding within 4 months of commencing treatment with Spironolactone. It is important to note that the hairs you shed now actually died 3 months ago and had been sitting dormant in the follicle until new hairs grow to replace them. As such, there would be a delay of about 3 months before the effects of Spironolactone are seen after commencing treatment.

This is a relatively safe medicine that has been around for 30 years and was originally developed to treat high blood pressure. Only in the last 10 years has it been used regularly to treat female pattern hair loss.

Common side effects are dizziness and tiredness, which may disappear in the first few days of treatment. Due to their effects on altering potassium levels in the blood, it is important to have blood tests before you commence treatment and during treatment. Some women may have breast tenderness and menstrual irregularities that usually settle within the first 3-4 months of treatment. Allergic skin rashes are rare with spironolactone but if you develop a new rash and you suspect that this is related to Spironolactone, see your doctor immediately.

It is highly recommended to use an oral contraceptive pill so you do not get pregnant while on Spironolactone treatment as it is harmful to the unborn baby.

Spironolactone is most commonly prescribed in a pill form by doctors for the treatment of thinning hair in women. While it is one of the most common orally ingested antiandrogens, some women don’t feel comfortable taking it. Others prefer to add to the regimen by using a topical antiandrogen as well. Topical Spironolactone can be considered a topical alternative, but without any risk of side effects. It’s a topically applied lotion or cream that works as an incredibly potent “androgen blocker”.

Whereas oral spiro works in the bloodstream to inhibit the hormonal processes causing your thinning hair, topical Spironolactone works locally to block DHT from binding to receptors and damaging your follicles.

In 1988, Pharmacia Corp. (then Pharmacia & Upjohn) introduced the first FDA approved product proven to stop hair loss and to regrow hair. Since then Minoxidil for both men and women has safely been sold to millions of people around the world as an over the counter product. Minoxidil is a topical solution applied directly to the scalp and is not taken internally (as with Finasteride).

The only other products to gain FDA approval to help men regrow their hair are Finasteride (Propecia/Proscar) and recently Dutasteride (Avodart), and cannot be used by women.

Scientists have uncovered the fact that men who suffer from Male Pattern Baldness have a higher level of Dihydrotestosterone or DHT in their scalps. Finasteride and Dutasteride help to block the formation of DHT which helps to lower the levels of DHT in the male scalp. There are key differences between Minoxidil and Finasteride, here is a quick look:

Minoxidil works by reactivating hair follicles where Finasteride and Dutasteride stimulates growth by altering male hormones inside the body.

Minoxidil reactivates or revitalizes shrunken hair follicles, increasing their size. While you continue to use Minoxidil, follicles gain greater volume, their growing phases become longer, and they produce longer, thicker hairs. This is counter to what people who suffer with male pattern baldness experience.

Usually, as males with MPB get older their hairs slowly become thinner as their follicles shrink. Minoxidil works to counteract this. Minoxidil should only be used if you are experiencing hereditary hair loss. In other words, if there is a history of hair loss in your family (on your mother’s or father’s side) then there is hereditary hair loss in your family.

If you are losing your hair for any other reason (medication, stress, illness, etc.), we recommend that you consult your physician.

At HLCQ after extensive experience with different formulations we recommend our Minoxidil,Azaelic acid, retinoic compound solution.

An oral supplement, Provillus works its way into the bloodstream which will boost the nutrients in your system to prepare the scalp for new hair follicle generation. Further hair loss will be prevented by strengthening the bonds and modifying the chemical reactions that take place in the body which cause hair loss.

A powerful mix of natural extracts work together in the Provillus formula to quickly block DHT, safely working to boost your body’s natural ability to transport essential nutrients to your scalp. The results will obviously differ depending on age, body type as well as genetics, but most users of Provillus have seen significant hair growth after only 3 months of use, with some taking a bit longer or even less time.

Compared to many other hair loss pills available on the market, Provillus is formulated with natural ingredients which are completely safe to take. It is important to note that all herbal supplements are safe.

The men’s version of Provillus contains Saw Palmetto which could potentially pose a risk to unborn babies. This is why the women’s version does not contain this ingredient in its formulation. There have been a few cases where Saw Palmetto has caused difficulty with urinating as well as sleepiness later in the night. If you are normally a night owl, staying up until past midnight, you may feel more like falling asleep now around 10 pm instead. However, overall Saw Palmetto doesn’t cause you to feel drowsy.

Procerin is a safe and effective two-part solution to male hair loss and thinning hair. Procerin tablets contain all-natural, powerful DHT blockers that have been proven in university and clinical studies worldwide. Procerin XT Topical Foam contains powerful hair growth stimulating compounds that have been clinically proven to assist in the regrowth of hair. Used together, Procerin tablets and XT Foam provide a comprehensive approach to fighting hair loss naturally.

Unlike some products that promise the same solution for male or female hair loss, Procerin is specifically developed for men only. Procerin’s active ingredients are scientifically developed to target the specific enzyme that converts the male hormone testosterone into dihydrotestosterone (DHT). Testosterone is converted by the enzyme 5 Alpha-Reductase (5AR) into DHT, which attaches to androgen receptors in the scalp and kills the genetically susceptible hair follicles at the crown and temple area.

The active ingredients in Procerin are all-natural compounds that have been used successfully both topically and orally for many years. Unlike many prescription medications, Procerin does not have any sexual side effects. Procerin can be used safely by men of any age, with all levels of hair loss. A small minority of men report mild stomach discomfort while taking Procerin, which is remedied by taking Procerin with food.

Whilst the above list is not exhaustive of the many medications on the market, these are the most common available within Australia.